A Guide to Tokushima: The Essence of Japan’s Shikoku Island

While Kagawa and Tokushima have shared a long history and kept positive relations since ancient times, Tokushima has set out to differentiate itself from Kagawa and the other Shikoku prefectures by shining a light on its own unique history, food and identity.

From local cuisine to adventure spots, Tokushima presents travelers with beautifully clear rivers and fantastically majestic mountains, and is the perfect place for any outdoor adventurer. Aside from bike tours, hiking, driving escapes and intimate stays with locals at specialist ryokans, Tokushima also contains culturally important sites, stylish cafés and restaurants where one can have a break from all that adventuring. Standing at a height of 1,955m, Mt Tsurugi is a wonderful climb for any level of hiker – there are multiple routes varying from relatively simple, for those wishing to take it easy, to a 30km trail. When taking the chair lift and a relatively easy route, the hike to the peak can be completed in just under an hour. At the top, you can see amazing views of the entire mountain range and the villages below. There is also a mountaintop shine, to which you can hike if time and stamina permits. It’s worth it if you’re interested in Japanese culture and history, plus the views from the shrine are also quite fantastic – you’ll feel as though you’re above an ocean of clouds. Those who opt for an afternoon hike in order to catch the sunset might want to stay the night in the family-run mountain lodge near the summit. The lodge is warm and welcoming (a perfect contrast to the freezing cold air outside) and is definitely preferential to an icy night hike back down the mountain. Upon entering, you are greeted with the kind of warm hospitality that can only be found in the countryside of Japan. Hot tea, bright smiles, delicious home-cooked food and a room fully equipped with a Japanese kotatsu (a table with a heater attached to the underside and a blanket over the top) – what more could you ask for after a long hike? Accessing the mountain is relatively easy, if you drive. For those who, like me, have yet to learn the mysterious ways of the car, you’re left with the options of public transportation – but remember to check your routes before you head out. Navigating the small mountain roads by car is also pretty difficult, so caution should be taken – drive slowly and stay safe. Taking a Bicycle Tour Around Tokushima

Tokushima by car? Oh, no. Walking? Heavens, no. By bike? Now that’s a damn winner. Brompton Pottering Association offers the most interesting bicycle tours, from short six-kilometer routes to 40-kilometer adventures. Weaving through every side street and mountain road, this is the best way to connect with locals and really get a taste of Tokushima. Touring around on bikes allows for access to shrines and small temples otherwise unreachable by car or on foot. It’s also hilariously fun, with ample chances to meet and converse with locals – we were even gifted a bunch of persimmons from a kind grandmother and invited in for tea by a lovely old gentleman. While touring, we stopped off at Ruche Cahoa , a café that doubles up as a community hub for those who live in the area. The café uses locally sourced ingredients to create some fantastic cakes and dishes – the green tea cake was especially tasty, made with green tea from Nishi-Awa Farm. The guys at Brompton are super friendly and knowledgeable about the area, able to answer any questions one might have and professionally guide any tour group to some of the most awe-inspiring sites in Tokushima. English tour guides are available, and bookings can be made the day before until 6pm. I named my bike Leopardon after the giant robot from the Japanese live-action rendition of Spider-Man (look it up, it’s amazing) as he was my trusty companion on this adventure. For traveling around Tokushima, the bicycle is king. Nowhere have I felt stronger hospitality than when I was visiting the countryside of Tokushima. This sense of hospitality and openness was exemplified when traveling to Nishi-Awa, the agriculture and living area in Tokushima. Remnants of a society from the Jomon Period (300BC) and its system of using sloping lands for agriculture were used as the base to create this way of modern farming. This globally important agriculture heritage system is home to some of the nicest people I have met in Japan. It felt less like visiting a new area and more like coming home; there was a strong sense of community and a feeling that just by visiting this area I was also part of this group. 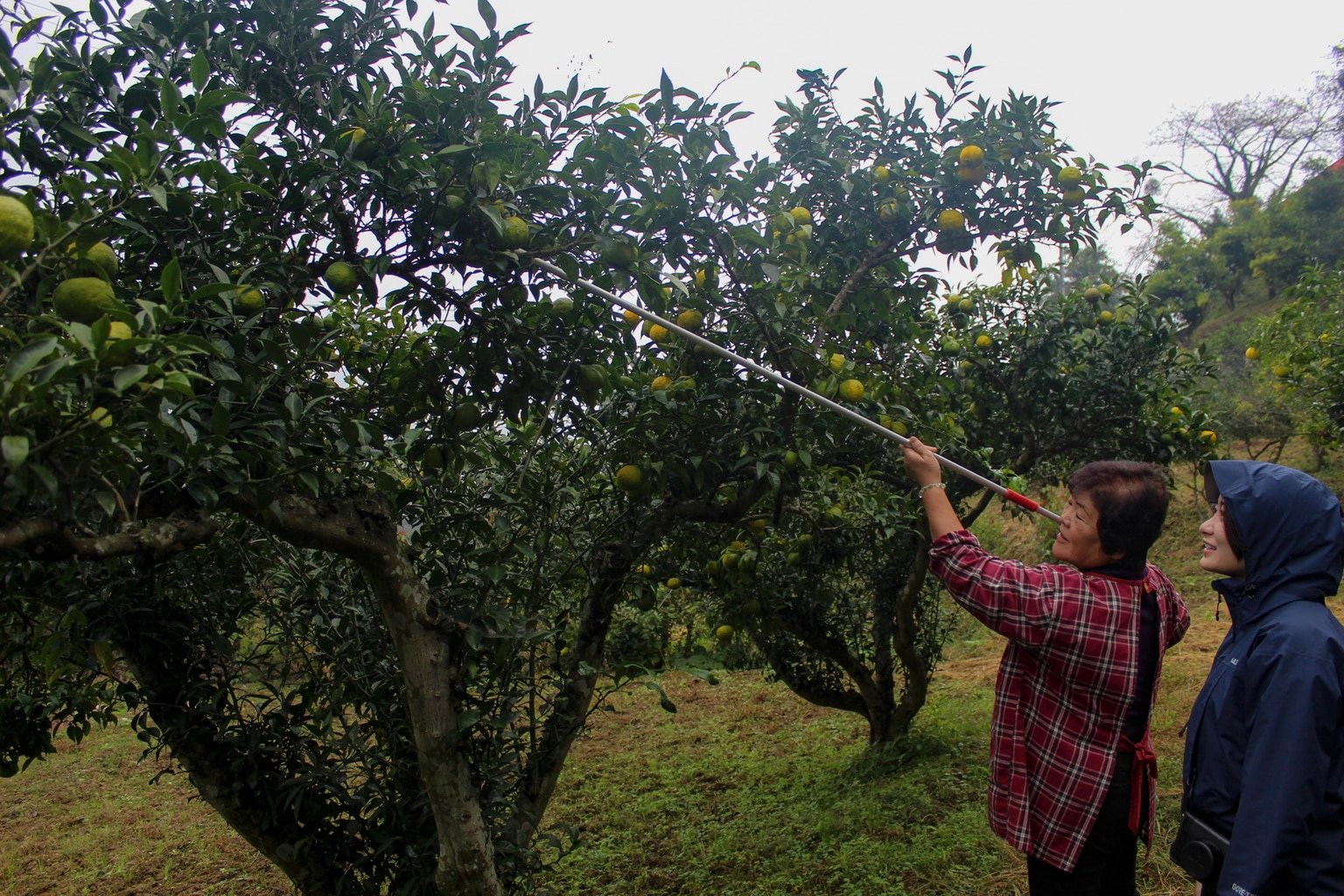 While staying in Nishi-Awa I was treated to what the locals would call countryside food . This included some of the best home-cooked meals I’ve had in Japan – deep in flavor and made with ingredients sourced directly from outside the house. This was energy food for farm work but made with the love and experience of those living in this community. Boasting restaurants, farms, local business and incredibly special ryokans (such as the one I had the privilege of staying at located on a Yuzu farm), this community is especially welcoming to foreign travelers, keen to share their rich culture and farming practices with visitors. Although I entered the community without even knowing of its existence, I left with a deep understanding and love for all that makes it special – and a whole bunch of omiyage. While visiting the city of Tokushima, I highly recommend taking a walk back in time and checking out the town of Wakimachi. Located a stone’s throw away from the Yoshino River, this little city is the perfect place to discover traditional Japanese architecture and breathtaking old structures from the Edo period. Wakimachi is home to a 430m-long row of well-preserved buildings from the Edo period that includes traditional homes, stores and traditional craft workshops. While visiting, I was able to try my hand at different traditional crafts unchanged for hundreds of years: indigo dyeing and traditional Japanese umbrella making. Look out for many examples of udatsu, high-winged wall structures that were originally built on the edges of roofs to prevent fires from spreading to or from adjacent houses. Because these udatsu were quite costly to make, they also doubled as a sign of wealth. In the last decade, the area has become a protected site and thus any change to the area or any new building erected must abide to the strictest guidelines in order to match the authenticity of the city. Any and all renovations must also abide by the strictest laws in order to protect the area. Night or day, the street is an amazing stop on any traveler’s visit to Tokushima. During daytime, the mountains can clearly be seen when standing at the bottom of the long road, while at night the street is lit up in all its splendor. Depending on the time of year, various festivals are also held here. Mountains, bike tours, traditional towns and some of the friendliest people you’ll meet in Japan, Tokushima Prefecture truly has something for any traveler willing to make the trip to the fantastic island of Shikoku.