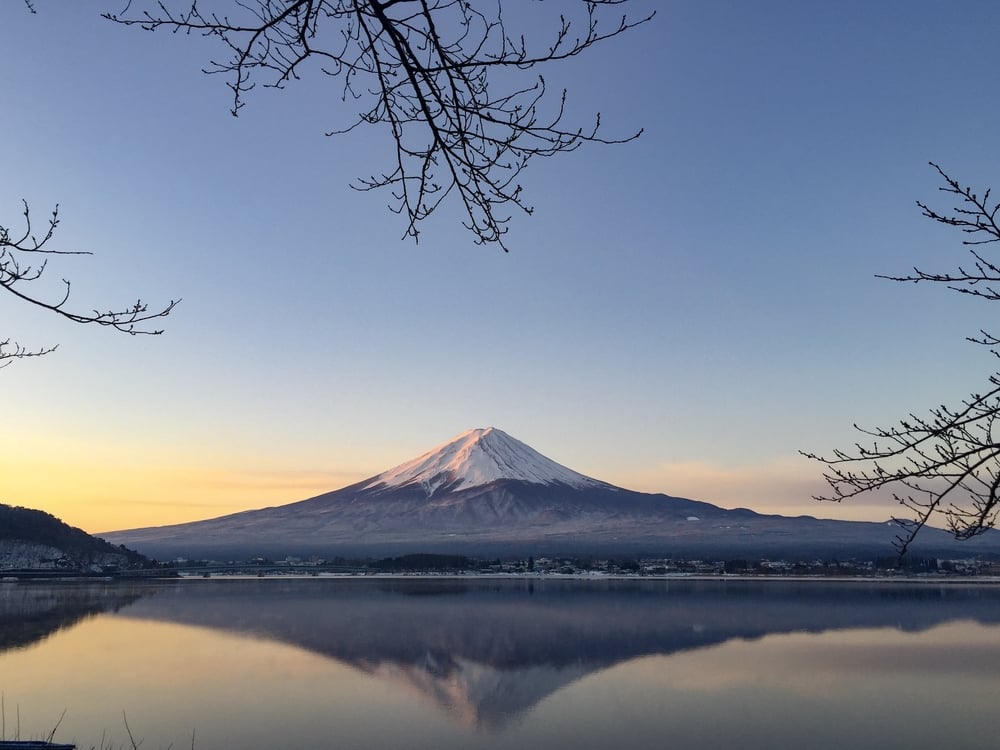 Do you know who the first woman was to climb Mount Fuji or the name of the Fuji five lakes' version of Nessie?

Mount Fuji, perhaps Japan’s most famous symbol, has fascinated people for millennia. Even today, appreciation for this sacred mountain ranges from adoration to downright obsession. It has inspired everything from Katsushika Hokusai’s woodblock print series One Hundred Views of Mount Fuji to this bizarre blue curry from a few years ago.

Ask any person in Japan and they can probably tell you these three facts about the mountain: It’s 3,776 meters high, it’s Japan’s highest mountain and more than 200,000 people climb it every year. But what else do you know about this natural national monument? In honor of Mountain Day, here are nine facts to spice up any conversation about Japan:

1. You can Get Married on Mount Fuji’s Summit

What better way to declare your undying love for your partner than by scaling Japan’s tallest mountain and tying the knot at the top? It’s a relatively exclusive affair, as Fujisan Hongu Sengen Taisha only offers weddings at its Okumiya shrine at the summit during mountain-climbing season in July and August.

Because of the lack of space, wedding parties are limited to a maximum of 10 people. It’s an experience that’s sure to make you feel giddy (hopefully it’s not just altitude sickness), and if the high life isn’t for you, there are hundreds of stunning lakeside locations that include a view of Mount Fuji in the background instead.

2. Mount Fuji’s Main Resident Kami is a Goddess (and She’s a Bit of a Badass)

Guardian deity of safe birth, fire prevention, ocean voyages, weaving and more, Konohana-no-sakuya-hime wears many hats. She is the daughter of Oyamatsumi, who you’ll find at Mount Oyama (specifically Oyama Afuri Shrine, known for its tattooed pilgrims ) in Kanagawa Prefecture’s Isehara city. Konohana-no-sakuya-hime, though a strong symbol of femineity and maternal love, is no shrinking violet. Mount Fuji erupted frequently for eons, but once Konohana-no-sakuya-hime ascended the mountain, she quelled its fury and extinguished its fire. In doing so, she made it (mostly) safe for people to worship up close.

Also, when Konohana-no-sakuya-hime was accused of infidelity when she fell (heavily) pregnant on the first night of marriage to Ninigi-no-mikoto, a grandchild of goddess Amaterasu, she proved her innocence. How, exactly? She set fire to her birthing hut and safely gave birth to three boys in the middle of what became a raging bonfire. In doing so, she showed that the babies could be none other than the great-grandchildren of Japan’s sun goddess, because otherwise they would have been burned in the blaze. Although there is a lot of fiction mixed with fact in Konohana-no-sakuya-hime’s tale, we do know that Mount Fuji has been active for over 100,000 years and remained so until the late Heian Period. We also know that Mount Fuji is still technically active and it’s only a matter of time before it will erupt again.

We also know that any future eruption can and will cause chaos on roads, railways and the skies because of the ash buildup. Mount Fuji’s last eruption was the Hoei eruption, during the Edo Period. It started on December 16, 1707, and lasted until January 1, 1708. In those two weeks, most of the area surrounding the mountain was covered in ash — some places up to 3 meters deep — destroying crops and causing famines. The accumulated ash caused landslides and flooding long after the initial eruption. Even Edo (now Tokyo) was blanketed in several centimeters of ash and tephra. So… don’t make Konohana-no-sakuya-hime angry.

4. Women Used to be Forbidden to Climb Mount Fuji

Despite Mount Fuji’s spiritual connection to women, and alleged “maternal aura,” women were strictly forbidden from climbing the mountain for centuries. This was the case for most sacred mountains across Japan. The ban also extended to those in mourning and anyone considered “unsuitable” for whatever reason, but only women were completely disqualified, based solely on their gender.

Why, you ask? Well, several excuses were proffered, the main being that women disrupted the sacred ascetic practices required to ascend the mountain. At Mount Fuji, it was said that women — especially beautiful ones — may make Konohana-sakuya-hime angry and cause Mt Fuji to erupt again. To avoid her wrath, women were only allowed access to the mountain as far as the second stage.

They were instead sent to Omuro Sengen Shrine and the caves at the base of the mountain, known as tainai, or “inside of the womb.” Caves in folkloric Japan has strong associations with wombs and served as a metaphor — going through a cave was seen as a form of rebirth. Women were allowed in these spaces and they became important direct spiritual connectors to sacred places like Mount Fuji and other mountains.

5. The First Woman to Climb Mount Fuji was Tatsu Takayama

There was at least one woman who flouted the ban before it was officially lifted in 1872. In fact, Tatsu Takayama — the daughter of a wealthy farmer — climbed to the top 40 years before that, in 1832. She chopped off her hair, donned men’s clothing and joined a group of five men to make the arduous journey to Mount Fuji’s summit. Another known exception to the no-woman rule was Lady Fanny Parkes, the wife of an English diplomat, who scaled the mountain in 1867. She’s possibly the first non-Japanese woman to make it to the top. 6. You Can Climb Mount Fuji in Tokyo (and elsewhere)

But what if you were a woman who didn’t want to break the rules just to get a taste of Mount Fuji? That’s where Fuji-zuka come in. Fuji-zuka, or Fuji “mounds” are manmade miniature versions of Mount Fuji. They first served as surrogates for women, the elderly and children and others who were not allowed or otherwise unable to make the dangerous journey to the mountain top.

These pint-sized Mount Fuji imitations were said to give the same spiritual experience as climbing the real thing. You’ll find many of them across Tokyo and the Kanto region, most of them ranging from one to 10 meters high. Some of them you can actually climb, others are — at least these days — just for show. You’ll find Tokyo’s oldest Fuji-zuka at Hatonomori Hachiman Shrine in Sendagaya (not far from the New National Stadium ). It was completed in 1789 and is an easy one-minute trip to the peak, which stands at just 6 meters high. The view may not be as good as the original, but it’s not too shabby.

7. A Large Part of Mount Fuji is Private Property

Most of Mount Fuji is — as you would expect — government property. However, Fujisan Hongu Sengen Taisha and its thousand-strong shrine collective own the mountain from stage eight upwards. So, from 3,360 meters to the tip at 3,776 meters, you’re technically walking on private property.

It sounds complicated, but ownership has been a point of contention since the Meiji Period. The Meiji government appropriated and nationalized the mountain in 1871 as part of their heritage protection scheme, but returned land to many shrines and temples after World War II. Fujisan Hongu Sengen Taisha went to court and fought for Mount Fuji’s summit in court in 1974, eventually regaining ownership in 2004.

Fujigoko, or Fuji five lakes, are popular sightseeing destinations in their own right. With vineyards, luxurious lakeside inns and unrivaled views of Mount Fuji , what’s not to like? However, you may want to think before you dip your toes in Lake Motosu at least, as that’s where Japan’s own Nessie, known as Mossie, has been spotted on several occasions.

The first time was in 1970s, when a group of tourists claimed to have seen a large black shadow in the water. The news became a nationwide sensation and local Shizuoka fishermen set a fishing net in the lake to capture the mysterious creature. Alas, when they pulled the net out, they found it had been torn apart. Mysterious indeed. In October 1987, a Tokyo man spotted a roughly 30-meter-long black back popping up out of Lake Motosu’s waters. He took three photos showing a black shadow to the right side of the center, claiming the back was lumpy “like a crocodile” and that it dove into the water soon after seeing it.

Several other people have claimed to have made similar sightings at both Lake Motosu and other lakes in the area, but there is no consensus as to what Mossie might be, or how she or he got there.

9. Mount Fuji is Home to One of Japan’ Three “Unusual” Festivals

One of Japan’s three major strange festivals — yes, that’s a thing — is held at the foot of Mount Fuji on August 26 and 27 every year. The Yoshida Fire Festival takes place around the end of the climbing season and is said to help quell Mount Fuji’s rage by feeding it fire and offering thanks through its festivities. A two-kilometer stretch is lit up by 70 three-meter-tall torches, creating an avenue of fiery light across Fujiyoshida city. Despite this annual sea of fire, there are no records of any fire damage in the festival’s over 400-year history. The Yoshida Fire Festival will take place on August 26 and 27 this year, but at a reduced scale .

Want more fun facts? Check out these 23 train-related superlatives and these nine facts about the island of Yonaguni .