Discover the Hidden Side of Harajuku: An Area Guide

A tourist hotspot known for its unique contribution to the world of fashion, Harajuku’s famous narrow lanes are filled with boutiques peddling all the usual “kawaii” knick-knacks and fashion accessories. But if one delves just a bit deeper into the backstreets, there lies a whole other world of treats…

Situated in the northeast quadrant of the Harajuku-Omotesando area is a labyrinth of small streets housing a collection of vintage and secondhand boutiques and shops. One of the oldest is Banana Boat , which has been in the neighborhood for over 30 years. Their signature wares are vintage Levi blue jeans — described by shop staff as “new old” — still bearing their original tags from the 80s and 90s. Just down the road is Fool’s Judge , which deals in secondhand items, mostly T-shirts and hoodies, from Supreme. This the place for you if you’re looking to drop over ¥100,000 on a T-shirt sporting a print of Mike Tyson. With more reasonable prices and a deep interest in vintage American urban fashion, Pin Nap – Pop Fashion has everything you need to relive the 90s in style. Adorned with VHS tapes of classic Eddie Murphy movies, an old boombox, and other mementos of the 90s, the shop sells vintage sneakers, neon windbreakers, Zubaz pants, and even thick gold chains like those donned by Run-DMC in their heyday. For the budget-minded shopper there are plenty of less specialized secondhand shops such as the cutesy One Woh and Flamingo . Also check out 2nd Street Reuse Shop as well as Chicago , which has two locations in Harajuku. Finally, it’s not all about clothes: a recent entrant into the Harajuku secondhand market is Filmcamera Tokyo , a camera shop specializing in film cameras and lenses. 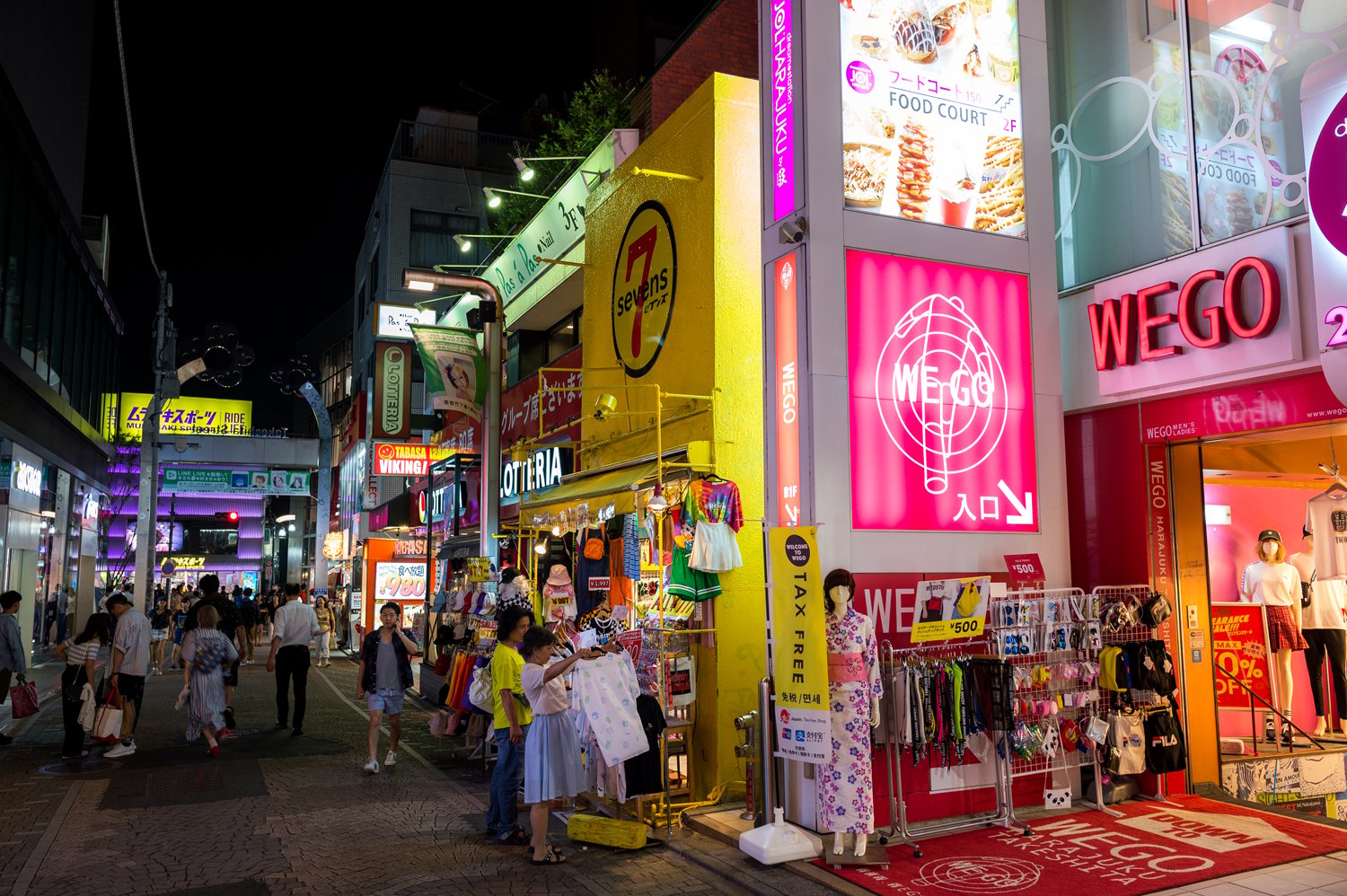 One coffee shop that’s been in the area for a few decades is Cafe Luigi . The original name long forgotten, the café took its current moniker after the legendary industrial designer Luigi Colani, who took up residence in Tokyo in the 1980s. Over the years, the esteemed designer was a regular at this particular Harajuku haunt, which is now adorned with a few of his designs. The coffee pairs well with their poppy seed cakes, and takeaway espressos are only ¥300! Another cool café that’s off the beaten path, and therefore seldom crowded, is Deus Ex Machina Café , a motorcycle-and-surfing-themed joint serving quality coffee at the hands of skilled baristas.

Ice cream fans should check out Gomaya Kuki , a small café serving rich sesame ice cream (try their triple rich black sesame.) Also visit Wicked Snow , which serves “snowflakes” or shaved ice enriched with all kinds of flavors. Just up the street is Burn Side St Café serving coffee along with a cornucopia of sweet concoctions and inventions, mostly including ice cream, fruit and chocolate.

If you all you want to do is get away from the crowds, you’ll find refuge in the last place you might look. Just off Takeshita Street, one of the most crowded stretches of road in all of Tokyo, there lies Togo Shrine . It’s usually empty and features a serene koi pond and garden within its grounds.

Looking for more Western food options? There’s Chiles Mexican Grill just off Takeshita Street, offering easily one of the best burritos in Tokyo. They serve the full assortment of enchiladas, quesadillas, nachos, and tacos. A block or two away is Cafe Hohokam . Don’t let the name fool you — their menu consists mostly of a wide selection of American-style burgers and sandwiches. The place features a large terrace adorned with cacti and other Tex-Mex paraphernalia. Amidst an assortment of imported cuisines, there is one Japanese-style place that fits right in: Bio Ojiyan Cafe . They serve ojiya (Japanese rice porridge). You can choose loads of toppings and add lemon and ginger flavoring (which is highly recommended). For a supremely healthy option, try Aloha Salads , a Hawaiian-themed salad bar with a diverse menu of salads served in a clever paper bowl.

For a South American flavor, check out Que Bom Brazilian Sandwich Stand (see our full review in this article ). For something Asian, there are two Thai places stacked one atop the other: Kaffir Lime and Chao Bamboo . Finally, for a drink with your meal, head over to Baird Beer Taproom , a bar and grill serving a selection of domestically brewed craft beers.