Dejima: Walking in the Footsteps of Jacob de Zoet

I spent most of my first morning on the island of Dejima trying to sober up. A foolhardy endeavor when cloaked in the muggy sweat of the Nagasaki spring and surrounded by hordes of yammering schoolchildren.

But I soon began to account for this burning of the candle at both ends as an act of journalistic integrity. I was, in a sense, inhabiting the role of the characters I was seeking. Because when Dejima’s former residents weren’t swindling, brokering and whoring, they did little else but drink.

Moreover, my primary goal was still intact: to walk in the footsteps of Jacob de Zoet.

Who is Jacob de Zoet?

When I told a friend this was my reason for departing to Nagasaki , confusion swept across his face.

“He’s a fictional Dutch bookkeeper from the 1700s.”

He surveyed me with a look of boredom so utter I thought it might trigger a stroke.

“You’re going all the way there for that?”

Jacob de Zoet sprung into being several years after author David Mitchell – of Cloud Atlas and Ghostwritten fame – stepped off a tram in Nagasaki, circa 1994. Mitchell had alighted at Dejima, “a greenish moat and a cluster of warehouses from an earlier century,” as he described it in an essay, On Historical Fiction . But while not yet a published author, he was convinced the place “crackled with fictional potential.” For over 200 years, between the 17 th and 19 th centuries, Dejima was a fan-shaped, manmade island tethered to Nagasaki harbor. Created by channeling a canal through a small peninsula, the 15,000-square-meter patch of land — then connected to the harbor by a bridge — was Japan’s window to the outside world.

Dejima was constructed in the early days of the Sakoku period of national isolation to intern Portuguese residents of Japan and quell the spread of Christianity. But it soon became the preserve of the Dutch East India Company, a trading conglomerate established in the early 1600s by a newly independent Netherlands with goals of colonizing and monopolizing business in the Orient.

Dejima and its inhabitants served as inspiration for Mitchell’s 2010 novel, The Thousand Autumns of Jacob de Zoet , a historical narrative focused on the travails of its titular character: a bookkeeper from Domburg in the employ of the Dutch East India Company at the turn of the 19 th century.

Through a web of concise plotting, characters that erupt with individuality, and prose dripping with word-nerdery and masterly erudition, Mitchell’s novel is a treatise on the first Europeans to have long-standing contact with the Japanese and a tale of love, hardship and clashing cultural mores in the once-mystical East.

Parched, sleepy and armed with a bulky copy of The Thousand Autumns , I traipsed over the land bridge in search of the specter of Mitchell’s diligent, if hopelessly lovestruck, protagonist.

Today Dejima sits several hundred meters from the harbor, which has been expanded on swathes of reclaimed land. The perimeter moat has been re-channeled and many of the original wooden buildings, fusing Japanese and Dutch architectural styles, have been reconstructed in accordance with maps and artists’ renderings. But De Zoet first encountered Dejima — “his home for the next year” — from the foremast of the Shenandoah in Nagasaki Bay, with thoughts of his forbidden Psalter on his mind and a sketch book and charcoal clasped in his hands.

Shading in the rooftops, warehouses, residences and sunken foundations of the island, he observed the Land-Gate, connected to the shore “by a single-span stone bridge over a moat of tidal mud,” and the Sea-Gate where the Company sampans were loaded and unloaded during trading season.

De Zoet guessed Dejima was no more than 200 paces long and 80 deep. Or as Mitchell’s fictional deputy chief of the island, Melchior van Cleef, more aptly asserted, “No man ever lost his way on Dejima, without he had a bladder-full of grog in him.”

This is ideal walking distance, however, for someone feeling less than chipper. So, I proceeded along the flagstones of Long Street, through Bony Alley and on to Sea Wall Lane.

It’s a small road network connecting warehouses where trading materials were stored — sugar, silk, cotton, materia medica and animal skins from the Dutch; and camphor, porcelain, lacquerware, silver and rice from the Japanese — and buildings which housed company employees.

A fundamental aspect of world-building, or at least world recreating, is ensuring the place feels lived in. And on the buildings’ upper floors, Dejima comes to life. 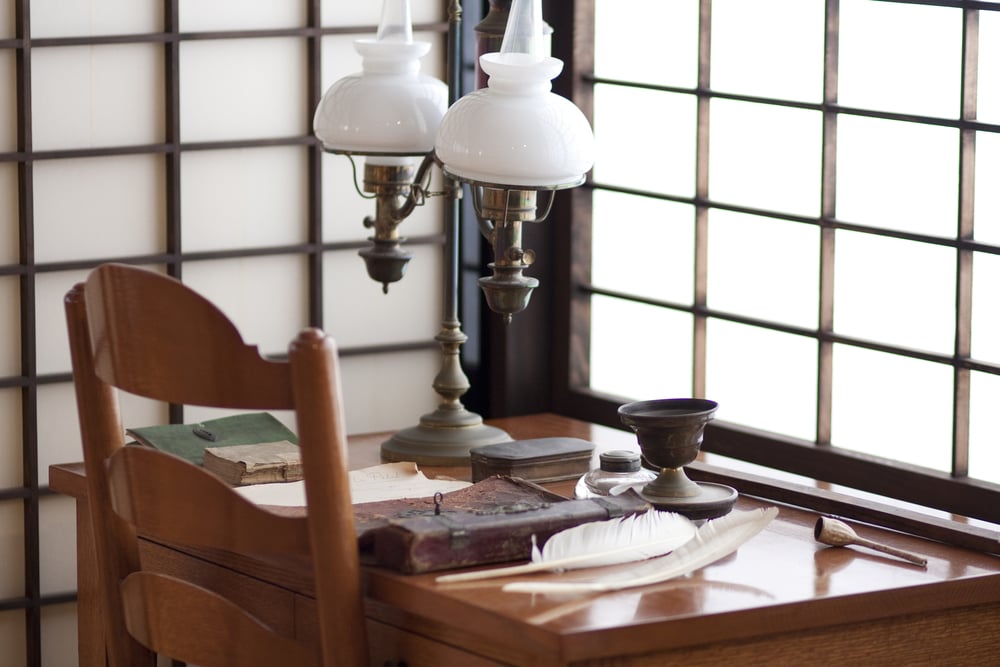 In the chief factor’s residence sits a tatami room, dappled in kitschy karakami wallpaper, where official business was once conducted. One could imagine de Zoet perched at the corner table, scrivening the edicts of Chief Resident Unico Vorstenbosch, a man whose contempt toward the Japanese was only matched by their reciprocal disgust at his lack of etiquette.

Next door, a Christmas feast of roasted meats, platters of vegetables, freshly baked bread and red wine enlivens a long dining table. The holiday would have been celebrated under the guise of “Dutch Winter Solstice,” as Christianity was then-forbidden in Japan. But that wouldn’t have hindered the festivities, or the participants from becoming “intolerably homesick, even abusive, merry and maudlin, often all at once.”

I popped over to the garden of Dr. Lucas Marinus, based on the real-life Dejima resident Philipp Franz Von Siebold who penned the revolutionary Flora Japonica and helped introduce Western science to the Japanese.

This is where de Zoet first confessed his love to Orito Aibagawa before she was whisked off to Lord Abbot Enomoto’s clandestine mountaintop shrine. A student of Dr Marinus and the bearer of a large burn mark on her face, Aibagawa becomes the object of de Zoet’s desires, the one thing beyond his hidden Psalter that gives life purpose on the claustrophobic outcrop of Dejima.

But de Zoet would be the first to concede that his advance wasn’t met with open arms.

“Crumpling, burning and freezing, Jacob retreats, but the garden has quadrupled in length, and it may take a Wandering Jew’s eternity before he reaches the cucumbers, where he kneels behind a screen of dock leaves; where a snail on the pail flexes its stumpy horns; where ants carry patches of rhubarb leaf along the shaft of the hoe; and he wishes the Earth might spin backward to a time she appeared, asking for rosemary, and he would do it all again, and he would do it all differently.” The Sun Sets on Dejima

I returned on my final evening in Nagasaki to watch the sunset over Dejima. As the lights of Long Street flickered on, doorways breathing a salubrious glow onto the dusky streets, I started to feel a real synergy with de Zoet.

He came to Japan to find his fortune and in the process lost his heart. I think many foreigners in this country can sympathize with that notion: whether we’re here in search of material wealth or a fortune in the currency of experience, losing one’s heart to the country is often a by-product.

Try as we might, however, such love for Japan isn’t always reciprocated. And perhaps that is the most sobering notion of all.