This Tokyo-based artist makes cool comic characters, and some of them are badass cats

Tokyo Weekender’s series TW Creatives features various works by Japan-based writers, photographers, videographers, illustrators and other creatives in a bid to provide one additional platform for them to exhibit their talent. The works submitted here belong entirely to the creators — Tokyo Weekender only takes pride in being one of their most passionate supporters!

For our latest entry, we present the meow-gical fantastical beasts created by Tokyo-based illustrator Masayoshi B. L. Ninomiya, who also publishes artwork under the penname The Tome of Masa . Masayoshi often creates characters and worlds that would fit a comic book narrative, and his  “Claws and Sorcery” series is no different. He says he usually draws humans, but in a spur of inspiration and amidst discussion with friends he ended up reimagining fantasy characters as anthropomorphic cats. His cat characters are challenging the kawaii representations too prevalent in Japanese popular culture, as well as pushing the boundaries of who can be a character and a hero in a story. He is shaking up the gender dynamic – too often in fantasy have the male of the species (both human and animals) taken the lead.

Here is a selection from his “Claws and Sorcery” exhibition:

His cat heroes and their surroundings are modeled after the medieval period, a favorite among the fantasy genre creators. Hence the taverns, libraries, religious imagery and the armor and weapons. Finally, a hand-drawn self-portrait of the artist: 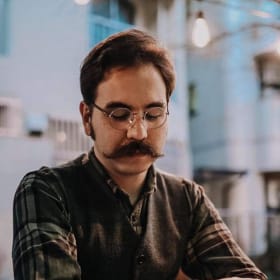 Masayoshi B. L. Ninomiya is a Brazilian illustrator and comics essayist living in Tokyo.
Bachelor in Graphic Design at FAAP and Masters in Manga at Takarazuka University. Keen on creative experiments with myriads of materials. Here and there in the emerging art scene among the foreign artists in Tokyo. Sporadically exhibits his world, characters and stories inspired mainly by epic sagas, high-fantasy novels, sword & sorcery, sci-fi and sometimes, sadly, current matters and contemporary politics.

Zoned out in high school once and never came back.

Want to be featured in TW Creatives ? Fill in this form or reach out to us at [email protected]