With Kickstarter backing and scheduled to appear at Tokyo Art Book Fair, Peep Magazine is ready for launch

Tokyo Weekender’s series TW Creatives features various works by Japan-based writers, photographers, videographers, illustrators and other creatives in a bid to provide one additional platform for them to exhibit their talent. The works submitted here belong entirely to the creators. Tokyo Weekender only takes pride in being one of their most passionate supporters. This time, we introduce a new film magazine called Peep Magazine.

Peep Magazine (stylized as PEEP) is a bilingual movie magazine intended to create cultural exchange and conversation by discussing movies. Founded by writer and illustrator Theo Goodyer and translator and writer Korin Nonaka, the first issue looks impressive. They’re currently having a Kickstarter campaign for it with the theme of “aliens.”

This theme is literal and metaphorical. The first issue will include many discussions related to aliens such as being different, coming of age and capitalism. The articles in it will discuss the movies Alien , Blade Runner , The Day The Earth Stood Still , Food Fight , FLCL and Nowhere .

It will be a 36-page two-color (black and green) A5 riso-printed zine, coming out in October 2021. There will also be a digital Peep issue containing more than 40 pages and bonus content not included in the print copy.

In addition to his passion for movies, Goodyer also pegs the creation of Peep M agazine as a response to the worrying increase in fascism and Asian hate. He hopes bilingual art might add more positivity, with the first issue touching on themes such as diversity.

Nonaka, meanwhile, brings another perspective to the project. Coming from the Japanese countryside, she knows that rural kids can be disadvantaged. There were no arty shops or even cinemas in her hometown when she was young. But she also knew that art was a powerful vehicle to convey a message.

As with any good translator, Nonoka strives to bring a sense of creativity to her translations while maintaining the authors’ original intent. The first issue will have works by 20 different artists and writers, from 10 different countries.

You can buy a copy of Peep at the Tokyo Art Book Fair (October 22–October 31) from Handsaw Press. It will also be sold online. And you can follow the magazine on Instagram . A launch party is planned for November 3, check out the latest info on Peep’s Instagram nearer the date.

Scroll down for more artwork from the first issue and more information about the founders. 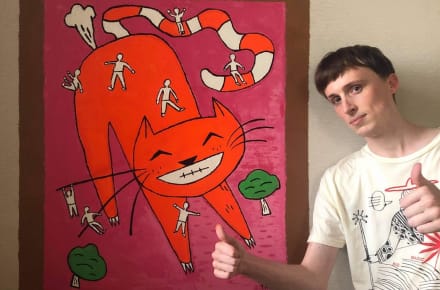 Theo Goodyer is a British illustrator and writer who moved to Tokyo on a whim 3 years ago and hasn’t looked back since. He’s always been obsessed with comics and movies and worked in a comic shop for five years while at school. He created his own comics ( Cowboy-Munky ) but prefers working collaboratively. He started Peep Magazine as a medium for diverse perspectives and as an excuse to work with his many talented buddies. 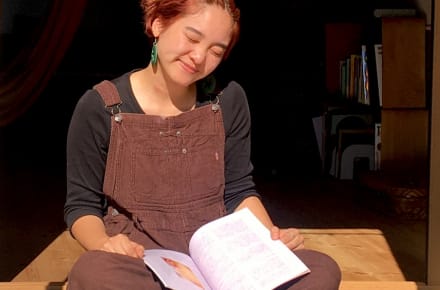 Korin Nonaka is a native of Hida Takayama, a countryside town in Japan. She is a DIY artist, university student and a founder of “Cats Whiskers.” This is an alternative school in Hida Takayama for absent kids who have trouble with mainstream education. This issue has affected her own sister.

While at university Nonaka realized fashion and art are tools to fix social problems. With her best friend, she created the zine Zukkyun Gorilla which focuses on their lives and tribulations. They’ve published three issues so far.