A neon world of popular culture, gachapon and gaming

Akihabara has always been a very hands-on corner of Tokyo. Stores crammed from floor to ceiling with electronics, pop culture collectibles and gaming arcades gives it an intimate vibe. But in the wake of the pandemic, which has seen much of Japan do its best to become as hands-off as possible, how has the city’s beloved Electric Town handled the situation? Gone But Not Forgotten

Today Akihabara feels much like it always did, with two notable exceptions: The absence of Sega Building Number 2 and the Gundam Café.

A titan of both the video game world and the Akihabara skyline, Sega took up residence in a multi-story gaming arcade that once brightly glowed with anime characters and neon lights. That was until in late 2020, when the pandemic and its effect on such tourism reliant businesses is believed to have contributed to the arcade’s closure.

While no specific explanation was given by the establishment, it appears the same lack of business caused by the pandemic also forced the Gundam Café’s closure at the beginning of this year .

While the iconic arcade and café are no longer, that’s not to say that similar experiences can’t still be found elsewhere in Akihabara. In fact, the scene is almost surprisingly strong. The home of manga and anime, Japan has long had an affinity for collectible versions of its popular animated heroes and villains. Still, there’s no better place to find your favorite Saiyan or Pokémon than Akihabara.

As you exit the station you can walk in almost any direction and soon be confronted by the likenesses of these characters, beckoning you towards their displays. If you’re looking to get truly lost in a world of collectible wonder, you can’t go past the towering Mandarake Complex . Here you’ll find floor upon floor of manga, games, cards and everything in between. Irresistible little packages of miniaturized life, Gacha Gacha or Gachapon (the Japanese onomatopoeia for the sound the machine makes) are in plentiful supply here, especially thanks to the Akihabara Gachapon Hall .

Filled floor to ceiling with some of the weirdest and whackiest miniatures you’ll find in Tokyo, there’s no better place to grab yourself a tiny vending machine or a turtle wearing a construction worker’s helmet for the mantle at home (you absolutely need one). Nintendo, Sony and Sega: three of the world’s largest and most influential video game companies, whose history is both on display and for sale throughout Akihabara.

For the weekend warrior, there are the traditional pay-to-play arcades brimming with simulators and claw machines daring you to try your luck. While for the collectors, retail stores filled with games and consoles of bygone eras are waiting to deliver a serious nostalgia trip. Few of which can compare to the world-famous Super Potato .

Although a retail store, with a vast inventory that includes decades of gaming history, you’d be forgiven for thinking that Super Potato was part museum. From the original Nintendo Famicom console of 1983 to a library of original PlayStation games, there’s plenty of gaming antiquity on offer for you to either acquire or admire. Nothing builds an appetite quite like the thrill of purchasing a Gameboy game you grew up on 15 years ago. Luckily, you’re spoilt for choice in Akihabara.

For those who want to keep the pop culture ball rolling, there’s the infamous maid cafés . Here you’ll often find yourself greeted as “Master” or “Princess” by waitresses in French maid outfits, before choosing from some of Tokyo’s most kawaii menu items. But do note, the experience of a maid café is one to be participated in, so be prepared for the possibility of singing or even casting spells on your food to make it more delicious.

Finding a maid café couldn’t be easier, as you’ll frequently be offered flyers by maids on the street in the surrounding area. But for a tried and tested experience, Maidreamin has a number of cafés situated throughout Akihabara.

If you’re looking for something a little less magical and a bit heartier, there are also some delicious ramen and kebab options. While many of these stores are either quite small or offer takeaway only, Deniz Turkish Kebab has plenty of seats and is a great spot to sit and people-watch over a kebab and some baklava. As is the case with almost all of Tokyo, vending machines are everywhere. But here , tucked away in a corner just off the beaten track, is where you’ll find some of the most random and simply unknowable items to have ever been stocked within your favorite beverage dispensers.

While the standard snacks and drinks are available, it’s the inclusion of other less common items, like toy Rhinoceros Beetles and cans of spaghetti meat sauce, that set the selection apart. Not to mention the apparently ancient popcorn machine that somehow wound up here.

But the real puzzle is the mysterious packages filling some of the machines. White boxes bearing no information regarding their contents, instead marked only with paragraphs of Japanese that refer to everything from current world events, to the outcome of someone’s dentist appointment. As for what’s inside these mystery packages, there’s only one way to find out. 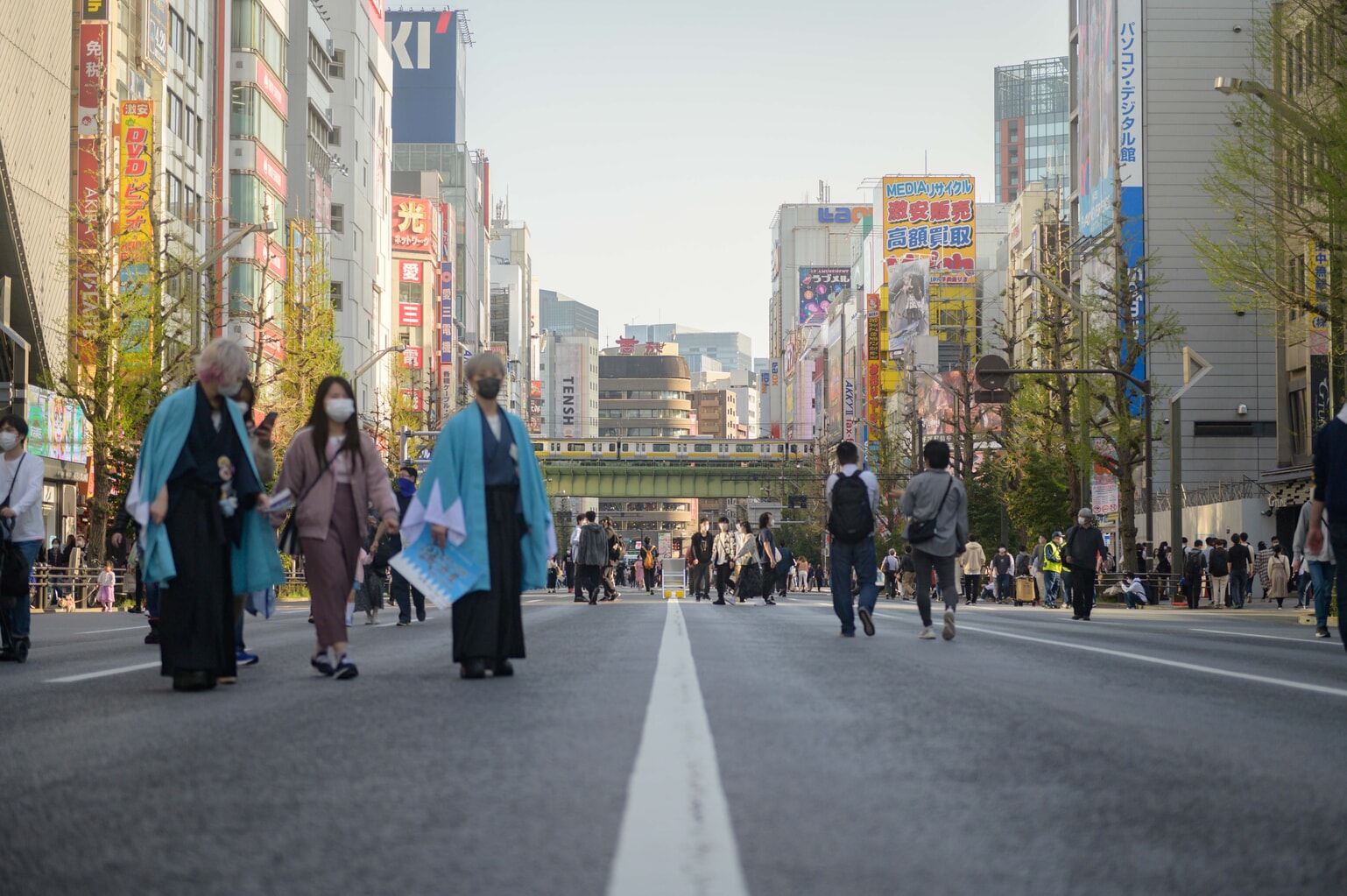 While there’s never a bad day to visit Akihabara, it’s hard to argue for a better day to go than Sunday, when the central section of Chuo-dori (the main street running through Akihabara) is closed to traffic.

This closure, sectioning off approximately 500 meters of road, allows pedestrians to wander at their leisure through the very center of Electric Town. A stroll that offers otherwise unknowable views of the skyline and trains passing overhead.

From April to September, these closures take place from 1pm until 6pm. From October to March, it’s 1pm until 5pm, making for a leisurely Sunday afternoon with a real sense of community amongst a world of Japanese pop culture.