Tokyo Weekender’s series TW Creatives features various works by Japan-based writers, photographers, videographers, illustrators and other creatives in a bid to provide one additional platform for them to exhibit their talent. The works submitted here belong entirely to the creators. Tokyo Weekender only takes pride in being one of their most passionate supporters. This time, we introduce Kinota Braithwaite , children’s book author and international school teacher.

Kinota Braithwaite writes the children’s books that he wishes existed. Inspired by his biracial children, he has created two picture books that feature Mio and Kei as characters. These beautiful stories came from painful experiences. “My daughter Mio experienced racial bullying at her elementary school in Japan,” Braithwaite explains. The students were making fun of her because of her skin color. Having experienced racial slurs while growing up in Canada, Braithwaite says it broke his heart that his daughter experienced something similar.

Even though they resolved the bullying, he couldn’t stop thinking of the many other children experiencing something similar in Japan. “I decided to write a picture book called Mio The Beautiful to promote the message of peace by educating children, parents and teachers that making fun of someone simply because they have a different skin color is wrong,” Braithwaite says.

Braithwaite recently wrote another picture book called Kei The True Friend. It’s the story of his son Kei who had trouble being accepted as a biracial child in Japanese society. It’s a picture book with beautiful illustrations designed for parents to read to their children and for teachers to use in their classrooms.

“I will admit that there were times when I wanted to give up because it was a lot of work juggling a full-time job, children, university studies and commuting to and from Tokyo,” Braithwaite explains. “Then, I thought about children like Mio who were being bullied and that gave me the motivation not to give up.”

Mio The Beautiful is self-published and self-financed. Kei The True Friend, on the other hand, was funded by a successful kickstarter campaign. 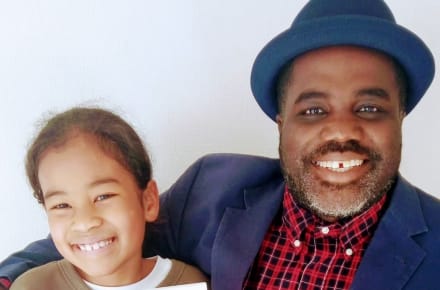 Kinota Braithwaite is an African Canadian children’s book author and international school teacher living in Japan. He creates children’s books inspired by his own biracial children’s experiences in order to promote peace, diversity, friendship and compassion for others.