From glamour to gore, this special effects wizard can do anything

But always she is Pepe: towering, red-headed, award-winning make-up artist, working freelance during the day and reigning over Shinjuku Ni-chome at night. Her portfolio ranges from high glamor to horror special effects. Out and about, you can always recognize her by the jaguar tattoos, glamorous make-up and entourage of friends who mill about her outside of the Ni-chome 7-Eleven, Pepe’s “second home.” To know Pepe is to love her and everyone seems to know Pepe Paladini.

Pepe (she-they) was raised in Sao Paulo, Brazil, in a mixed Japanese-Brazilian family. Pepe’s paternal grandfather was a fluent Japanese speaker who worked on coffee plantations, the booming industry that drew hundreds of thousands of Japanese laborers from the early to mid-20th century.

Pepe’s interest in special effects make-up began, in of all places, a clown school. As a teenager, she entered a government-run after-school program that focused on performance art. She was too shy for acting or dancing but enjoyed the clown classes and learned how to juggle and perform circus tricks. Her career changed course when she was fifteen. While preparing for a final presentation, Pepe saw the make-up team painting the acting students and thought, “Oh my God, I want to do that.”

She began building up her skills and portfolio from then on, studying the art almost entirely on her own using online courses and workshops. And, of course, her own face as a model to experiment on. At seventeen, desperate to live abroad, she moved to Japan, where she has spent the last fifteen years establishing herself as a freelance makeup artist.

Moving to Japan was easy for Pepe, due to her family ties guaranteeing her a long-term residency visa. Her father and brother later returned to Japan to start their own families, meaning Pepe has a greater support network than most foreigners. She and her father are close.

Freelance work can be tough but rewarding. “Sometimes there’s a lot of work and sometimes less. You have to ride the waves.” Pepe echoes freelancers’ woes. “There are definitely good points and bad. If I’d taken a regular salaried job, I could have a lot more security and wouldn’t have to do my own taxes and invoices. But I’m doing work I love to do. I can be openly LGBTQ and express myself freely. I don’t think I could ever be myself in a big company.” 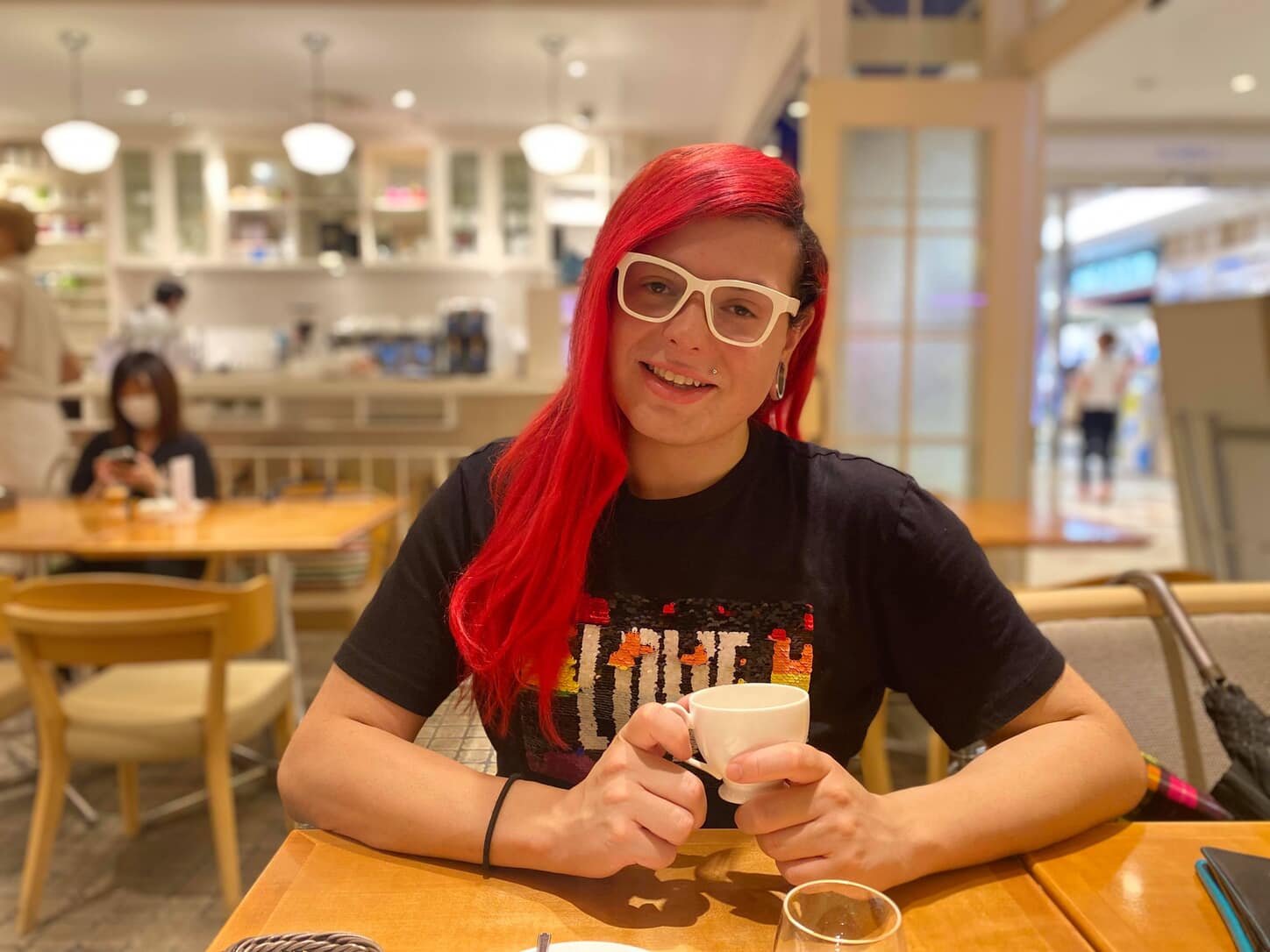 “Plus,” she adds, “I can take a long vacation whenever I want.”

For new makeup artists entering the scene, Pepe recommends practice and researching techniques on YouTube. Most of all though, it’s best to experiment on yourself and on willing subjects and see what kinds of creatures you can create.

From Glamour to Gore – Pepe’s Range of Artistry

Although the bulk of Pepe’s commissions are in natural-looking makeup (subtle blending and contouring for commercials and photoshoots) and high glam makeup, special effects makeup is her favorite. It’s challenging and creative — she uses latex and silicone prosthetics, an airbrush and paint to create monsters and corpses. A single commission is an intense process of molding and sculpting and Pepe can throw herself into complex assignments for days.

The first time I saw Pepe frolicking about in a bald cap, edges blended down with acetone, I gasped—thinking her hair had been a wig all along.

“I especially like to use a bald cap,” she says, referring to jobs where she has more creative control. “When you erase someone’s hair, they completely change and I can make them look like an alien. Whether it’s horror or glam, I want to change the faces of my clients until they look like a completely different person.”

Her client list ranges from people entering local costume contests to high-budget TV shows, movies and events. In 2016, Pepe got to work on the makeup team for the horror film Sadako vs. Kayako directed by Koji Shiraishi and in 2019 Mika Ninagawa’s crime film Diner .

June was a big month for Pepe as she began receiving hormone replacement therapy only a few weeks before we met up.

“Getting HRT was easy—maybe too easy,” she laughs. “I went to a clinic and the doctor was very practical. He said, ‘Do you want a shot?’ And I replied, ‘No! I want a full exam please.’ Transitioning can be dangerous.”

In particular, Pepe fears the mental health side effects of HRT. The worst, however, she hears comes from testosterone blockers, which Japan doesn’t prescribe.

“It’s better that way for me anyway, because I’m nonbinary. The results won’t be as dramatic, but that’s okay. I just wish Japan offered more mental health support for people who transition.” Growing up, Pepe had always felt different but never knew the words to describe what she was experiencing. After moving to Japan Pepe found work as a drag queen in a showgirls club staffed by mainly transgender women. In these women, Pepe felt a strong kinship and continues to be in touch with some of them to this day. She also found some of them very narrow-minded, however.

“They were the types to think you could only be a hetero woman if you transitioned. And they didn’t trust you were trans unless you were taking hormones and planning on getting surgery too.”

Pepe is somewhere in between. Learning about nonbinary and genderqueer identity was life-changing. “I’m not really a man and I’m not really a woman,” she says. “I date men, but sometimes I wish I didn’t.”

The Ni-chome community—as much as she loves it—can be incredibly segregated and Pepe has been chased off dating apps by vicious comments. At the same time, dating straight men makes her uncomfortable.

“They want to see me as a woman and that’s not right either.”

Pepe’s drag persona, Penelope Moon, became an interesting meeting point between her different passions. She developed the character’s name as a play on her nickname. She hits every corner of Pepe’s skillset: a dazzling face, a horrifying stunt. In one show in Aisotope Lounge, Penelope Moon tore a heart from her chest. At other times she hisses with a snakey prosthetic tongue or transforms into a satanic clown from Pepe’s childhood.
Penelope Moon rarely makes on-stage appearances due to her creator’s busy schedule, but when she rolls out it’s always a treat.

Pepe’s biggest dream is to get more special effects work and to have the time and freedom to explore her craft more.

“My favorite part is building—just making the stuff. Ideally, one day I’d like to have a team of makeup artists. There are many things you have to do: molds, running the silicone, painting and applying the prosthetic and hair punching. I’d love it if I had a team or a company with each person specialized in one thing so I could spend all my time building.”

At this point in her career, Pepe has all the skills she needs. What she requires now is exposure.

“The makeup artist community in Japan is very tight. It’s hard to puncture,” she says. “I’d love to collaborate with Japanese artists more. There’d be so much potential, but I need to find more opportunities.”

Moving forward, Pepe will enter even more makeup contests, local and international. Halloween is her moment to shine, when her commissions line out the door.

“I’ll just keep thinking of other ways to show my skills and keep exploring my potential. There’s a lot more I have to give,” she says with a laugh. “I can do this.”

TW Queer Japan: An Interview with the Vogue Artists of Japan